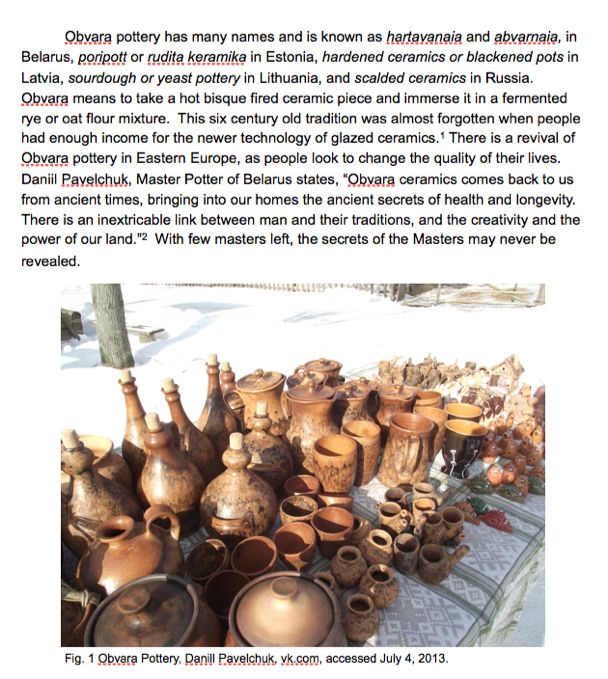 This is page 1 of the booklet I put together for the 2014 NCECA Conference.  I need to mail it out to all of the wonderful people that contributed to my findings.  So if you are reading this, I know I need to get that done-its on the never ending to-do list.  Please give me until this summer to get it to you, and send me your postal address so I can send you a copy. It is too large with the images to email it.

Many times, you just don’t know where life is going to take you.  My friend Gail invited me to raku.  She was doing an Obvara firing for the first time.  I was curious, and then after reading Jane Jermyn’s Facebook page, the Obvara Firing Technique, I got hooked.  I was really bugged by the phrase “an Eastern European Technique that I learned in Belarus. “  It wasn’t enough for me.   I wanted the history, I wanted to know who was using this technique and for what. So after using Obvara for my graduate show at Hood College I needed to take an Art History class to complete my Masters Degree.  I could not get to Hood once a week or even twice a week for class-I work full time and live 3 hours away.  Joyce Michaud approved an independent study, and it was entitled the Obvara, an Eastern European Firing Technique  - The History, Preservation, and Contemporary Development.  There is no getting off easy with Joyce, but she was correct that I needed to research all of that because it just makes sense...after the fact.

I was so involved. I spent a semester on the computer, making little to no ceramic work, and finding very little on the subject.  Then, what I did find was not in English.  Google Translate and Bing were my best friends-even though they were not always accurate.  There was a video that was shared with me, so my best friend (google translate)  would no longer work, I needed a translator.  In desperation, I contacted a tutoring sight looking for a Russian tutor that might translate.  That was a success!  Not only was my translator  capable, but she too got hooked.  Turns out she is from Belarus and in her free time she was searching the internet. She had the advantage of understanding the language.   She even sent her mother on errands “back home” to find information.  I am indebted to Iryna.

My research was going well and I felt like I had something to contribute to the ceramic world.  After all-I thought it was fascinating, maybe someone else might too.  I thought it might be fun to present at the NCECA conference.  (Now who thinks that more work seems like fun?  Crazy!)  It was past the due date for submissions.  I sent it in anyway, and received no response.  A few weeks later, I looked again, and this time I noticed “Student Presentations.”  They were still accepting proposals.  Now I am a student, part time, going for my masters degree in studio ceramics.  I wondered if it mattered that I am 57 and a part time student.  So I submitted my proposal.  When I received the acceptance letter, I was like a kid, jumping up and down with excitement. Again, am I crazy-I get to travel to NCECA, pay for airfare, hotels, meals, and lodging.  Yes, I get to attend the conference, and because I was presenting my registration fees were paid for, but sometimes I think (and my husband really thinks ) that there is something wrong with me.  I get an idea in my head, and there is no going back!  So here it is, almost Sunday and on Tuesday I leave for Wisconsin.

I hope that fellow artists are interested in this firing technique, and I can’t wait to see what is fueled by the information.  I know all the directions I have seen from my research, and all the directions I wish I had time to experiment with.  I can’t imagine what will be discovered in a year or so after artists have experimented with this process.

I would love to travel to Europe with Iryna to further my research.  In Latvia I would like to meet with Illona Sausa and meet with her group that is trying to brand Obvara.  I would love to go to one of their conferences and workshops.  I feel like I have made some friends in Russia and Belarus. I want to see and touch the work of Daniil, Vitaly, Ivan and Evgeny.  Perhaps they would allow me to fire with them and the ancient Obvara techniques would not be lost. It would be great to see if there was interest in an International Obvara Exhibit.  Through Jane’s Facebook page I have contacted people around the world.  Sergey, the technical advisor on the Russian Facebook page said that Obvara may be a new page in the history of ceramics.  I believe it is.  I would also like more information from the archeologists.  According to Sergey, that is a trip to the vaults in Moscow.  There is so much more to learn and share.  Crazy - but I’d like to do it!